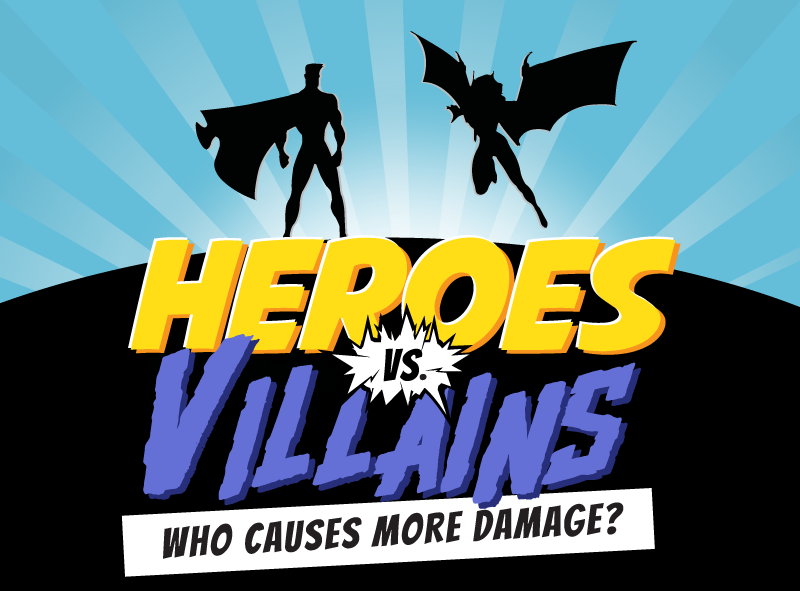 Want to skip directly to the infographic? Click here.

Bang! Pow! Ka-boom! One of the coolest things about superhero movies is experiencing the amazing special effects as the good guys and bad guys duke it out. From phone booths to football stadiums, helicarriers to entire cities, nothing is safe from these havoc-wreaking characters.

We decided to watch nine of our favorite action-packed Marvel and DC Comics blockbusters and analyze the damage and destruction. Do the villains live up to their name when it comes to wreckage? Or do the heroes actually destroy more in their quest for the greater good? Which characters are most destructive, and who breaks just a few windows and then calls it a day? Pop some popcorn and read on for our take on the topic.

Ah, the Hulk. He’s a hero, all right, but when he’s unrestrained and manipulated, he may be one of the most dangerous entities in the Marvel universe. In “Avengers: Age of Ultron,” the Scarlet Witch gets into the minds of the Avengers, mentally affecting the team and sending the Hulk into a rage that Iron Man tries to subdue. In the midst of battle between the Hulk and Iron Man, an elevator, staircase, city street, and outdoor market are all destroyed. Oops.

In “Man of Steel” (DC Comics, 2013), Superman is actually super destructive. Young Clark caused a bus to drive into the river, and later, Superman flew through two corn silos and a gas station and caused a Zod airship to crash into the city, destroying countless buildings.

In the epic final battle scene of “Iron Man 3” (Marvel, 2013), Iron Man takes down his enemies so fiercely that he and his suits manage to destroy the setting of the fight: an entire shipyard. Between that and the two enemy helicopters he takes out, it’s clear that the price of victory is a steep one.

Batman is perhaps the least destructive hero in all the movies we watched. In “The Dark Knight Rises” (DC Comics, 2012), Batman manages to shatter a window when he kicks Bane through a glass door. Gotham City sure is fortunate to have such a non-destructive protector.

The X-Men neglected to leave a trail of destruction in “X-Men: Days of Future Past” (Marvel, 2014) too. They were primarily on the defensive, so the extent of their devastation was miscellaneous water and kitchenware damage in the building where young Magneto was being held prisoner – no big deal.

Packed with jokes and great music, “Guardians of the Galaxy” (Marvel, 2014) is a fan favorite featuring lots of action but less damage than many other movies. Led by Peter Quill (aka Star-Lord), the misfit band of good guys is minimally destructive: Casualties include a broken window, a couple of prison security droids, and a few fighter droids.

In “The Amazing Spider-Man 2” (Marvel, 2014), Spider-Man battles Oscorp (the evil organization researching spiders) as it attempts to capture him. But who needs violence when you have spidey sense? His damage was small potatoes: After grabbing a fire hydrant with a web, he shattered a glass phone booth and a few windows.

When it comes to destruction, Ultron doesn’t mess around. In “Avengers: Age of Ultron,” this supervillain and his Sentries effectively destroyed an entire Eastern European City. And the city (as it levitated into the clouds) suffered damage within itself, including buildings, a street block of pavement, and at least one bridge.

In “The Dark Knight Rises,” Batman’s enemies (Bane and his cronies) shot up computer terminals at the New York Stock Exchange and placed explosives around the city, causing massive destruction to tunnels, a bridge, a football stadium, and buildings.

Oscorp villains (including living generator Electro) cause the lion’s share of the damage in “The Amazing Spider-Man 2.” They destroyed video screens, several vehicles, and a clock tower. The worst? Electro caused a blackout that prompted multiple buildings to fall.

The 2015 “Fantastic Four” movie focused a lot on backstory, but Doctor Doom made his small appearance count. Many items collapsed into his black hole — created as a portal between Planet Zero and Earth — including parts of a highway, two dozen or so cars, and a plane. Doctor Doom packed a punch, but thankfully the portal’s appearance was so brief that the destruction was limited.

In “Thor: The Dark World (Marvel, 2013),” the villains caused significant damage to the courtyard and grounds of the Royal Naval College in Greenwich, London, during the final battle. But compared with other villains, some of whom destroyed entire cities, their destruction seems relatively minor.

Villain Magneto was no angel in “X-Men: Days of Future Past,” but compared with some villains, his damage wasn’t as extensive (although admittedly still significant). His destruction included about a half-mile of train tracks, a baseball stadium, and part of the White House.

In “Iron Man 3,” the villains broke some windows, destroyed a water tower, and took down Air Force One. OK, so maybe none of the villains treaded very carefully …

The Magic of Movies

We saw the villains produce the most damage overall, though heroes can certainly hold their own when it comes to destruction. With so many more superhero movies on the horizon, it’ll be interesting to see if these trends continue – will superheroes need to do more damage to keep up with the increasingly dangerous villainy that awaits them?

Add this infographic to your site:

Heroes vs. Villains – An infographic by HomeAdvisor