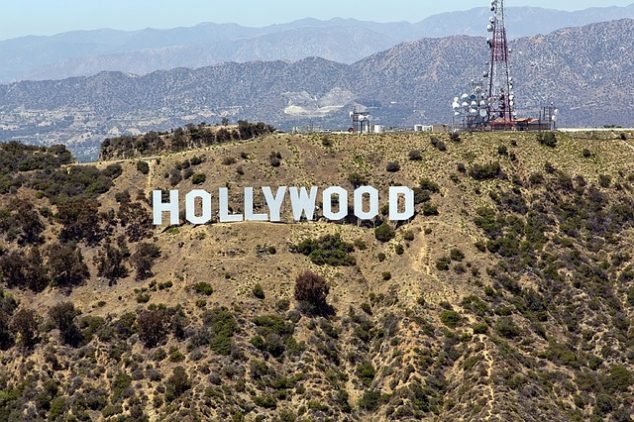 The Hollywood Sign is an easily recognized cultural icon that is located on Mount Lee, in the Hollywood Hills area of Los Angeles. The signs consists of forty five foot tall white letters that spell out Hollywood. Originally created as an advertisement for a housing development, the sign was left up and has since become an iconic symbol of the city, making appearances in television programs, films, and more.

The Hollywood Sign was originally created in 1923 and actually spelled out Hollywoodland. The purpose of the sign was the advertisement a housing development of the same name that was located in the Hollywood Hills. HJ Whitley, who had previously used a big sign to advertise his Whitley Heights housing development suggested to his friend Harry Chandler, who owned the Los Angeles Times newspaper, that the land syndicate he was involved in use a similar sign to advertise their development. The real estate developers agreed and contracted the Crescent Sign Company to create the letters to be placed on the hillside. The owner of the Crescent Sign Company, Thomas Fisk Goff, worked on designing the sign. He designed it to have approximately four thousand bulbs that would flash and light up the words Holly, Wood, and Land. At the time, the creation of the sign cost just over twenty thousand dollars.

While the sign was only supposed to be up for about a year and a half after being dedicated in 1923, as American Cinema began to become popular in Los Angeles, the sign became a symbol that was internationally recognized and as such was left up. Because the sign was only designed to be up for just over a year, it began to deteriorate and suffer extensive damage. In the 1940s, a man by the name of Albert Kothe, who was officially the sign’s caretaker, caused an accident which destroyed the H. Kothe lost control of his vehicle while driving under the influence and destroyed the letter H, though luckily he was not injured in the accident.

After the renovations in the 1940s, the Hollywood Sign continued to deteriorate and after a public campaign, the Hollywood Chamber of Commerce decided to replace the sign with a more permanent structure in 1978. The new sign was financed by donors that sponsored each letter which was made of steel and supported by steel columns situated in a concrete foundation. The new sign was unveiled in November of 1978 during a live special on CBS that was meant to commemorate the 75th anniversary of Hollywood being incorporated as a city. Additional restoration efforts took place in 2005 when the sign was stripped down and repainted.

The Hollywood Sign is located in a mainly residential area of the city and there are many tour companies that offer bus and van tours of the sign. It’s approximately in between West Hollywood and North Hollywood in the Griffith Park area. This has caused some upset with residents in nearby neighborhoods who are unhappy with the traffic and congestion caused by tourists hoping to see the iconic sign. These efforts have done little to stop tourists and sightseers from visiting the Hollywood Sign. Those looking to see the sign are not able to get too close as there are barriers in place to prevent unauthorized access. In 2000, the Los Angeles Police Department actually installed a security system around the sign that triggers an alarm any time there is movement in any of the restricted areas.