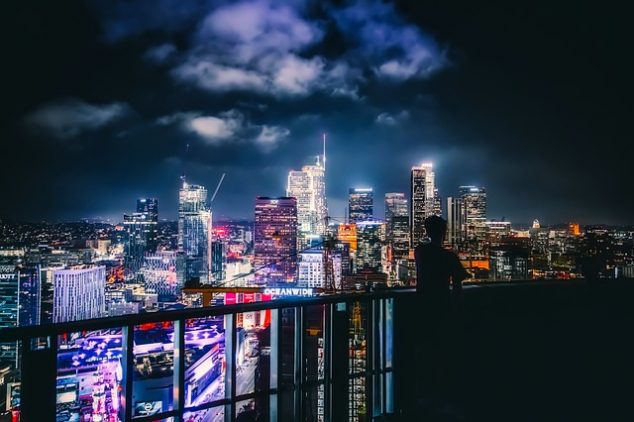 Los Angeles, a city rich in life, known to the many as the city where people go to become stars. Like many places in the United States, L.A.’s earliest beginnings belong to Native Americans. The Chumash, Fernando (formerly Tataviam), and Tongva peoples had settled in the area. 1542 marked when explorers began scouting the land, looking for a place to settle. By 1841 Los Angeles’s first census showed just over one hundred people settled in the area. That’s a far cry for the millions of residents there now. Los Angeles has made the dreams of many come true and has ended the dreams of many more. It’s a city full of opportunity for those brave enough to seek it.

Like any city with a long history, L.A. also has it’s share of ghost stories and hauntings. The following are from greater Los Angeles’ most historic and haunted places.

The Colorado Street Bridge in Pasadena stands 150 feet above the Arroyo Seco. The construction of the bridge lasted over a year. John Drake Mercereau, an engineer working on the project chose to angle the bridge in order to ensure it’s stability in the often wet arroyo bed, something that had been an issue from the onset of construction. The bridge was completed in 1913. Just six years later, in 1919, the first person to commit suicide on the bridge jumped. The bridge has known a long history of people taking their own lives. Consequently, it is now more commonly known as “Suicide Bridge.” It is said the bridge is haunted by those who have taken their own lives there.

The Hollywood sign was originally erected in 1923. Originally the sign read Hollywoodland, with a period at the end. The sign flashed in a three section sequence to draw in the eyes of the area’s people. Originally only built to last a year, the sign’s endurance parallels the everlasting reign and grandeur of the entertainment industry. The sign’s hauntings began in 1932 when a 24 year old showgirl named Peg Entwistle climbed to the top of the ‘H’ and jumped to her death. It is said that if you visit the sign at night you can see her ghost jump.

In 1927 construction of the Greystone mansion began. Ned Doheny Jr., along with his wife, had been gifted the land on which the manor sits by his father. Construction took three years to finish and, like most ambitious architectural projects, went over budget. Ned and his wife, Lucy, along with their children had been living in part of the residence since shortly after construction began. However, five months after their 1929 official move in, Ned was found murdered in the upstairs bedroom along with his friend, Hugh Plunkett. It is said that Ned and Hugh haunt the former residence.

The Queen Mary had its maiden voyage in 1936 from Southampton, England as a luxury cruise ship. The ship was known for its opulence as well as efficiency, setting records in luxury transatlantic travel and speed. During her time as a civilian ship the Queen Mary shuttled passengers such as Bob Hope, Winston Churchill, and even the Duke and Duchess of Windsor. However, come World War II the ship was recommissioned as a war vessel. The Queen Mary was painted grey and nicknamed “Grey Ghost” because of her color and ability for stealth. In 1967 the ship sailed its last voyage and docked permanently in Long Beach. It now operates as a floating hotel with tales of ghosts aboard. Most of the ghosts said to inhabit the Queen Mary are from its era as a war ship.

The Pantages open its doors on Hollywood Boulevard in 1930. The Theater has been a beacon of performance for decades, serving as both a stage theater as well as a movie theatre. The Pantages has hosted award shows and premieres. The theater was the last movie palace to be built in Hollywood and the last venue built by Alexander Pantages. The theater has changed ownership hands a few times, the first of which occurred in 1932 due to financial strains. The Pantages is said to be haunted by the ghost of a woman who died during a show there, as well as Howard Hughes one of the theater’s former owners. It is said that the best time of Hughes’ life was his time at the Pantages.

The Alexandria Hotel, constructed in 1906, was named after its owner Harry Alexander. The building has been declared a Los Angeles Monument, owing to its historic and cultural significance. It was the most opulent hotel until the construction of the Biltmore and boasted guests such as President Theodore Roosevelt, King Edward VIII, and Charlie Chaplin. Many are familiar with the building’s Palm Court ballroom. Most of the ghosts are not particularly well known, although it is said that Rudolph Valentino’s ghost appears near the twelfth-floor room in which he once resided.

The Millenium Biltmore’s construction began in 1921. In 1923, when it opened, it surpassed the Alexandria in reputation as the most extravagant hotel in Los Angeles. It was widely known to host its share of celebrity guests, as well as entertainment and political events. While the Biltmore sports rumors of several ghosts, its most famous is Elizabeth Short. Short, better known as the Black Dahlia, is rumored to have spent some of her last living days at the Biltmore and, consequently, her spirit has said to be seen there.