Lost America: The Reconstruction of 7 Great US Buildings 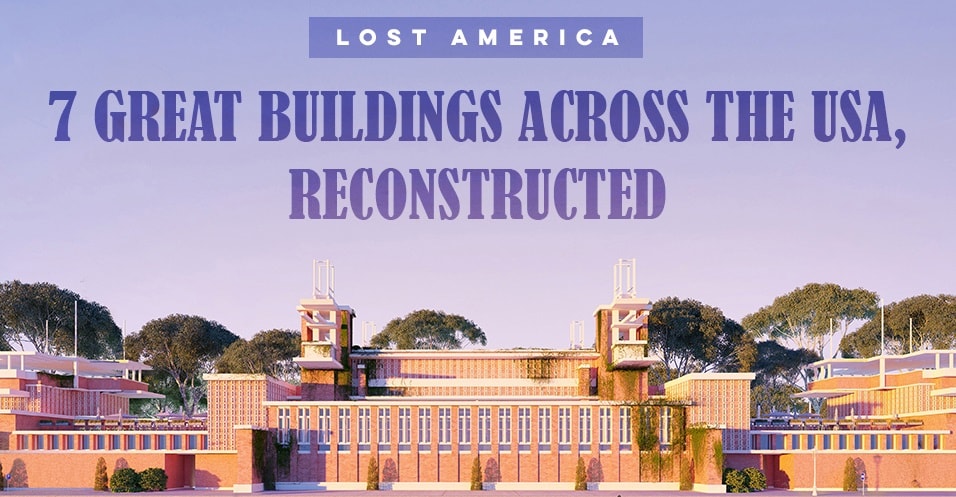 A brick and mortar building can elicit a sense of nostalgia and longing. But why are we so fascinated with the buildings of the past? Perhaps it’s the mix of familiarity and strangeness that draws us in – we see a street we know so well, but with a time-traveling intruder atop it.

In celebration of some of America’s most beautiful and interesting lost buildings, we’ve reconstructed seven in their original location. Discover how these structures from the past painted the skyline compared to how these locations look today.

What were they thinking? New York’s original Penn Station is – quite rightly – the inspiration for the historic preservation movement. The Beaux-Arts beauty was realized in 1910 to a design from the prominent McKim, Mead & White architectural firm. Its classical grandeur looks almost preposterous now, as if all the columns of Ancient Rome had been plundered for the project. To the dismay of many, the building met its end in 1963 when city authorities tired of its Versailles-like maintenance costs.

Built in 1908, this Lower Manhattan titan at Liberty Street and Broadway was, at one time, the tallest building in the world. It still holds one ‘world’s tallest’ record – it’s the tallest building to ever have been purposefully demolished. The Singer Building’s awkward office floor plan was its ultimate demise as it was unable to accommodate the growth of the companies within its walls. Nonetheless, as New York Times architectural critic Christopher Gray noted, the city lost a lobby of “celestial radiance” when the building was demolished in 1968. The site is now occupied by One Liberty Plaza.

It’s hard to believe that any of Frank Lloyd Wright’s creations have been demolished – but some 79 have. This entertainment complex, which opened 1929 in Chicago’s Hyde Park neighborhood, was as complex and interesting as the mind of its maker. Wright had never been commissioned for a project of this scale before and he threw his whole being into it. Unfortunately, prohibition set the site on a slippery slope and it was eventually bulldozed in 1929.

Set atop San Francisco’s Nob Hill, railway magnate Mark Hopkins’ mansion was a display of ornate Victorian excess when it was completed in 1878. The man never got to see the finished product for himself because he passed away just before the job was done. Unfortunately, the building itself didn’t go the distance either as it was destroyed in the fire that followed the city’s 1906 earthquake and was never rebuilt. The site is now the location of the InterContinental Mark Hopkins San Francisco.

From 1909 until 1969, Birmingham, Alabama’s principal railway station covered two full blocks of the city. Its Byzantine-esque profile made serious waves at the time as the architecture’s oriental influence was altogether too exotic for some tastes. With its stained-glass skylight and pew-like seating, the general waiting room had ‘place of worship’ vibes. But with the railways declining, the interesting design wasn’t enough to save the station from the wrecking ball. Today, the 7-acre site awaits repurposing.

Wes Anderson, eat your heart out! The Beach Hotel in Galveston, Texas took over-the-top to a level that the Grand Budapest Hotel could only dream of. Built in 1882, this wood-framed vision in red and white stripes lasted barely 16 years before a fire claimed its rare beauty forever. Though firefighters were able to save parts of it, it was simply too far gone.

The boards of this epically-proportioned, Manhattan theater were visited by everyone from legendary illusionist Harry Houdini to 500-strong choruses to entire circuses. The Hippodrome’s 1905 opening performance was entitled ‘A Yankee Circus on Mars.’ The theater had capacity for 5,300 spectators and up to 1,000 performers, but its fame was short-lived. The popularity of movies played a huge role in the eventual demolition of the building in 1939. The office building that now occupies the site calls itself the Hippodrome Center – but it’s a lot less fun than the original.