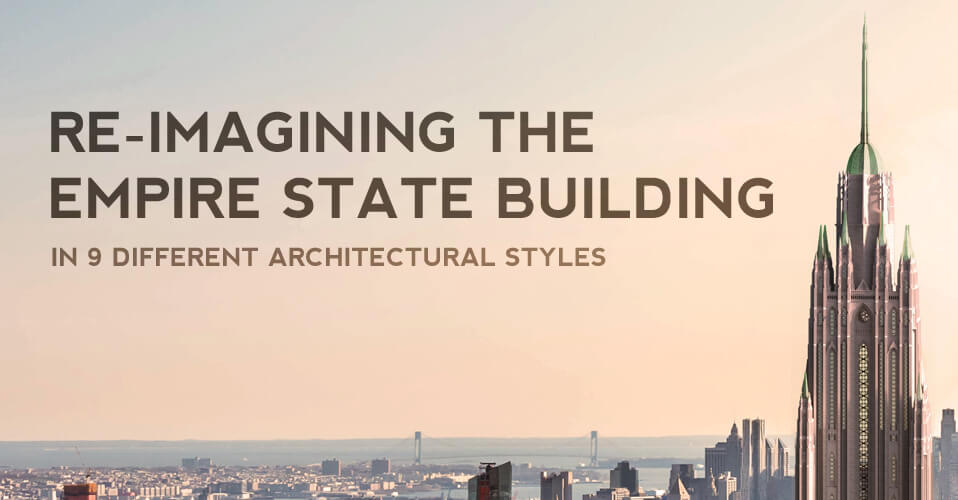 The Empire State Building is one of the world’s most iconic buildings. Standing at 1,250 feet, it was the world’s tallest structure until 1972. It gained fame by being the first construction to have more than 100 floors and went on to define the modern concept of the skyscraper.

A classic of Art Deco design, it’s so iconic that it is hard to imagine it looking any other way. But what would it look like as a Renaissance or Gothic construction? Discover this iconic landmark in 9 different architectural styles. 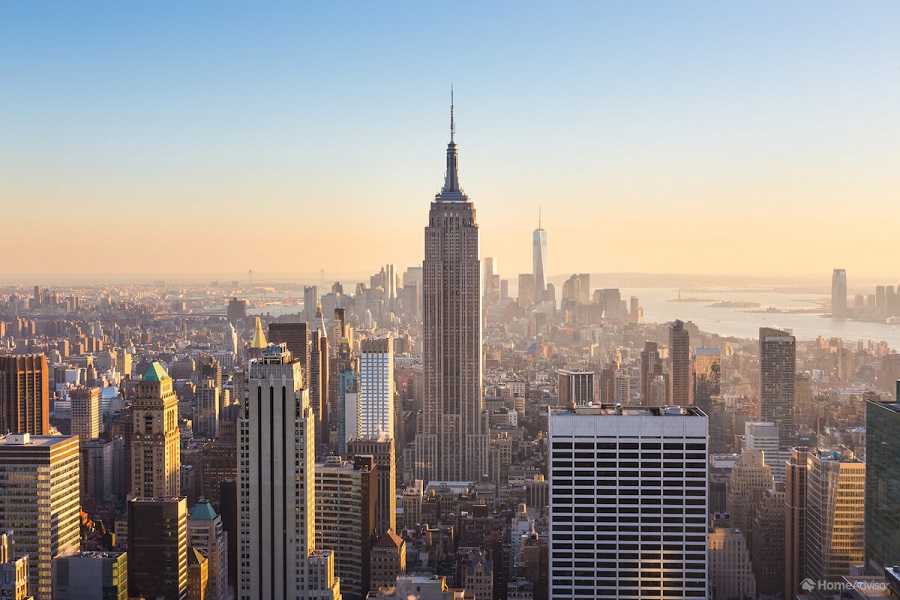 Roman architecture followed classical orders such as the Doric, Ionic, and Corinthian. Despite this reverence towards the legacy of Ancient Greece, Roman architects were great innovators and developed new construction techniques of their own. For example, they were the first civilization to use arches to support their structures. It obviously worked as many iconic structures such as the triumphal arch and amphitheater are still seen to this day.

Did you know? To give their buildings a traditional look, the Romans continued to incorporate columns even after they were no longer structurally necessary. Talk to a remodeling pro to add a column to your home. 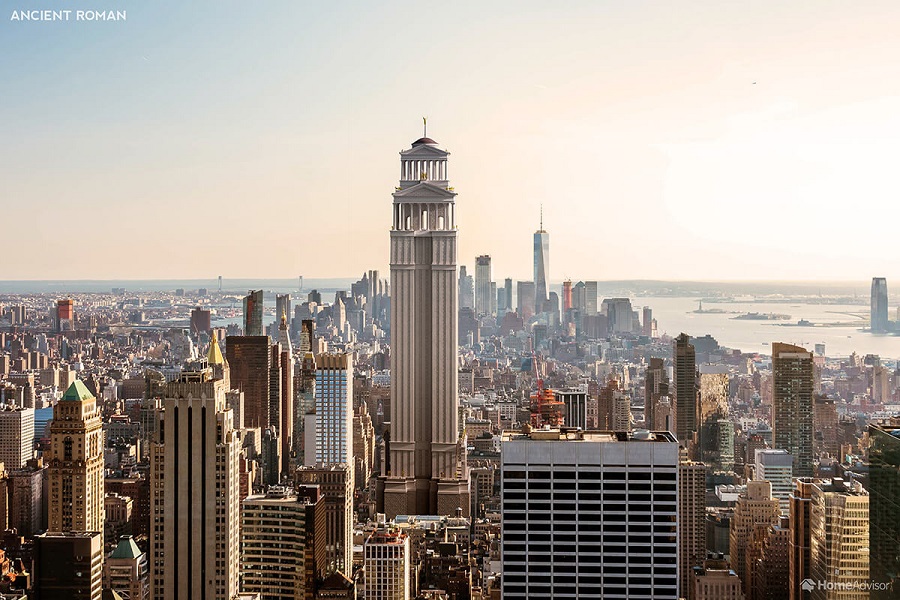 Renaissance architecture originated in Florence in the early 15th century. Architects of the time rejected Gothic style intricacy, instead opting for a return to the simplicity and balanced-proportions of Roman classicism. Rounded arches and domes were revived, and architects strived to create structures which would appeal to both emotion and reason. Buildings such as the Florence Cathedral and the Basilica of San Lorenzo prove that they succeeded in their ambitions.

Did you know? During the Renaissance it was considered essential to an architect’s training to visit Rome to study the ancient buildings and ruins. 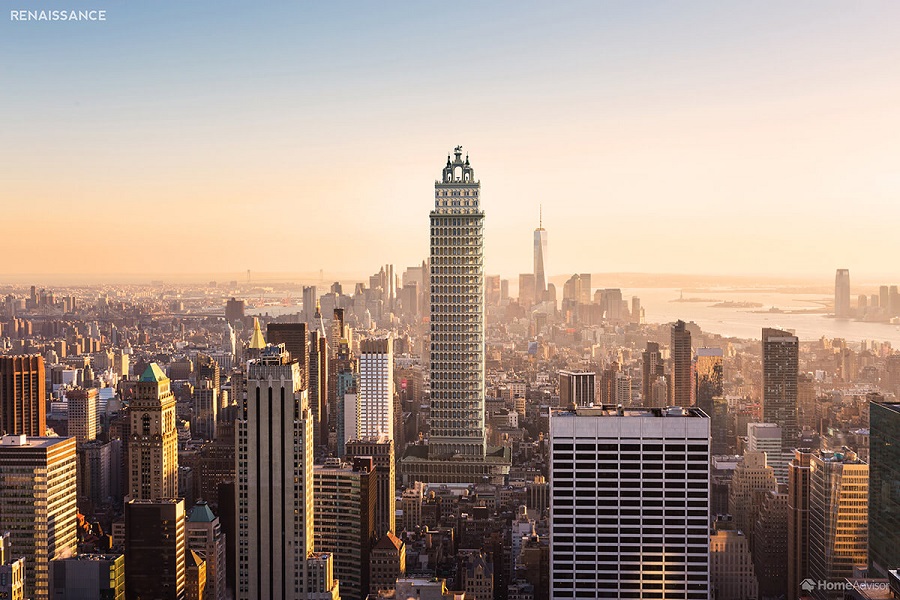 Originating in northern France in around 1140, the Gothic style produced some of Europe’s most beautiful, and impressively engineered, buildings. Gothic cathedrals and churches can be identified by their pointed arches, ribbed vaults and flying buttresses. Constructions such as the Notre-Dame in Paris and London’s Westminster Abbey continue to captivate visitors to Europe to this day.

Did you know? Rib vaults, flying buttress and pointed arches were all designed to increase natural light – which was a problem due to the soaring heights of the buildings. Take a page from the Gothic-style handbook and hire a ceiling pro to vault a key room in your house. 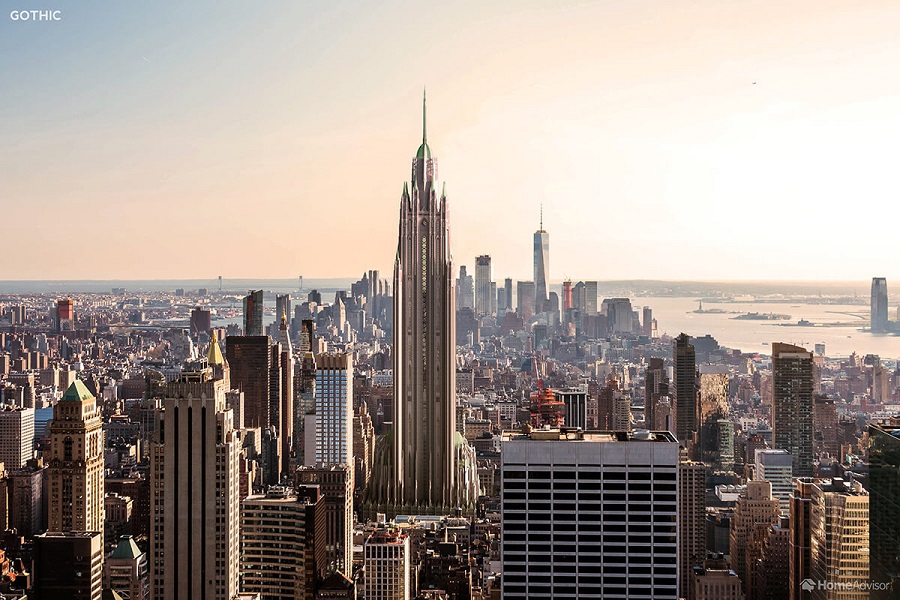 Starting in around 1890, the Art Nouveau movement produced some of the most beautifully-crafted buildings in history. Architects throughout Europe and America made use of materials such as glass and wrought iron to create elaborate, curved lines and shapes inspired by natural forms. Perhaps the best known examples of this style can be found in Barcelona, thanks to the legendary Antoni Gaudí who designed many of the city’s landmarks. 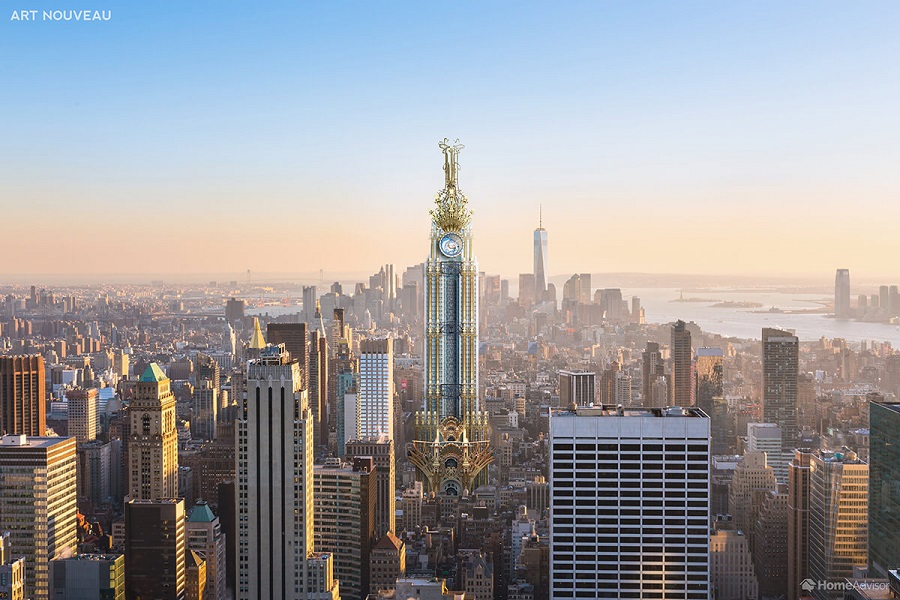 Steeped in tradition and emphasizing harmony with nature, Japanese architecture, aka 日本建築 Nihon kenchiku, has a very long history. Structures were usually elevated slightly off the ground, and architects installed sliding doors instead of walls, allowing the space to be customized for different occasions. Many of the country’s spectacular shrines and temples in this style are still standing.

Did you know? Japanese buildings were traditionally built with wood because of the abundance of timber at the time, but also due to the material’s resistance to earthquakes. 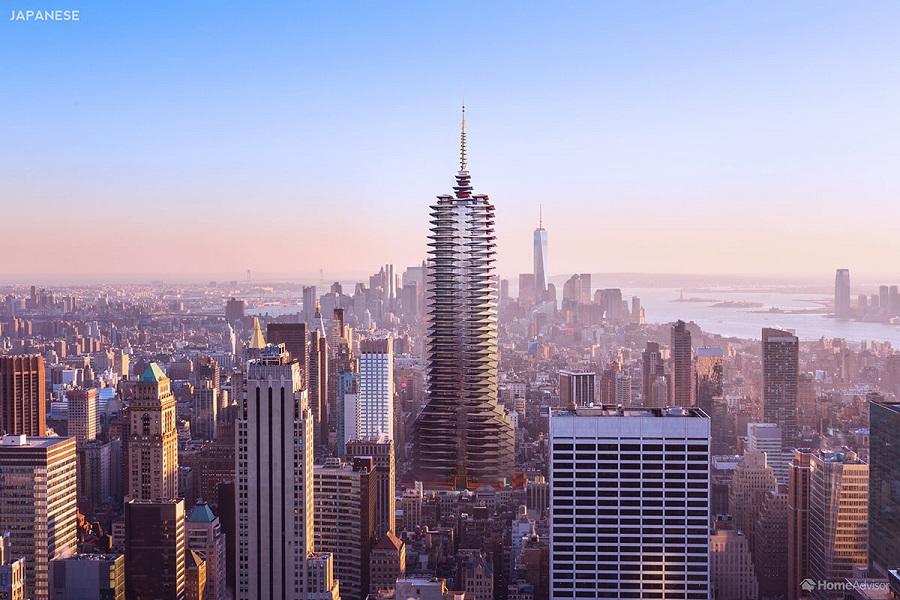 Did you know? In 1966 the massively influential Complexity and Contradiction in Architecture, written by architect Robert Venturi, fundamentally changed how we think and talk about architecture. 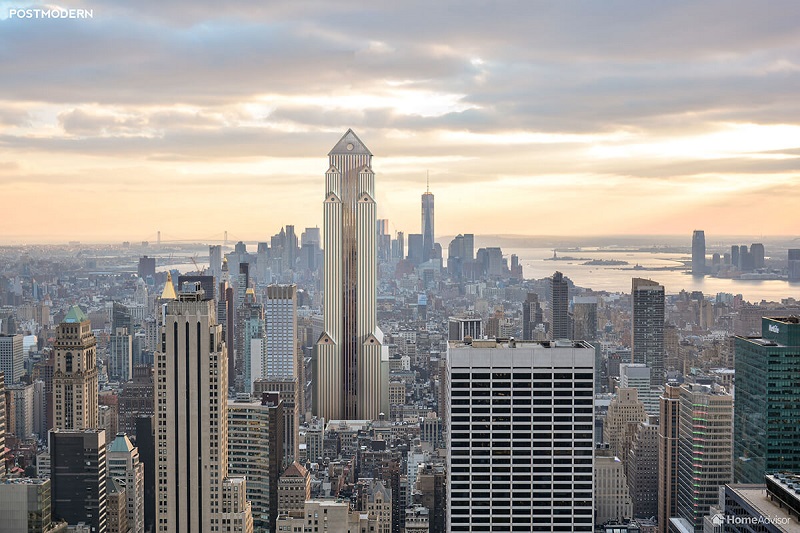 Over the years, Brutalism has been demonized and celebrated in equal measure. The term was coined by the British architectural critic Reyner Banham in 1955 to describe the work of architects Peter and Alison Smithson. From the 1970s on, these fortress-like, concrete monoliths became immensely unpopular. They only rose in popularity recently when new admirers started to praise buildings like Preston Bus Station and Park Hill in Sheffield as architectural landmarks. 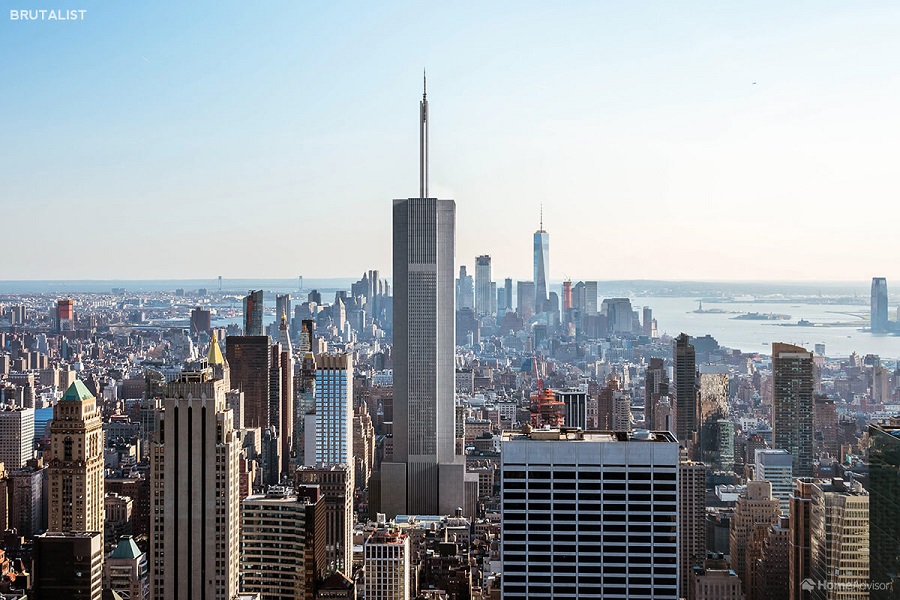 Like postmodernism, deconstructivism doesn’t revolve around one coherent ideology. It’s more about breaking traditional architectural rules. Deconstructivist architects are strongly opposed to the idea that a building must look consistent and organized. They, instead, design structures that are broken into seemingly unconnected components. The Guggenheim Museum in Bilbao is perhaps the best-known example of this mind-bending style.

Did you know? Deconstructivism was born out of philosophy. It was primarily fathered by Derrida who sought to undermine preconceived beliefs around reason and logic. 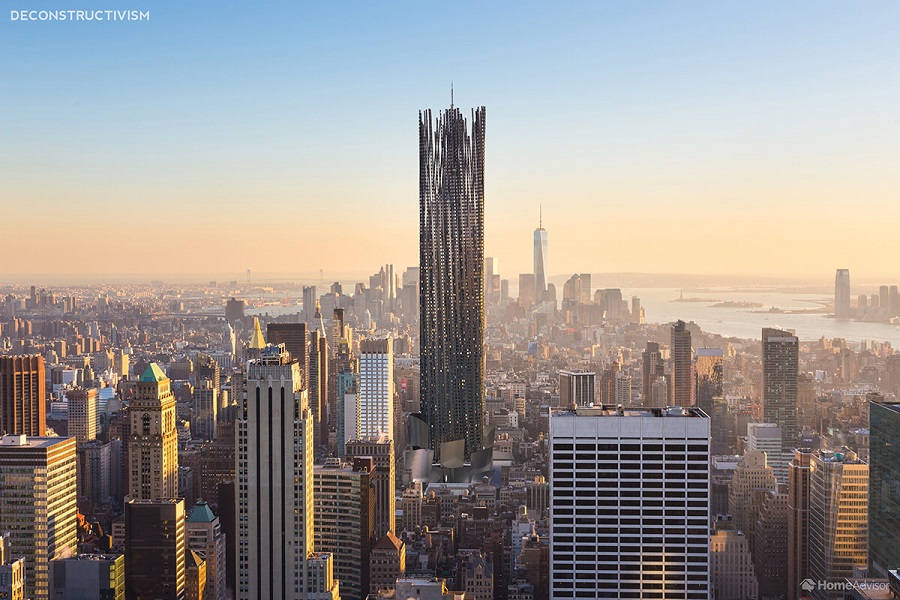 Sustainable architecture is on the rise in today’s eco-conscious world. Natural and renewable materials such as concrete, wood and rock, along with recycled glass and lumber and even living plants are used. In our re-imaging a frame attached to the middle of the building allows for the planting of a ‘green-wall’ consisting of thousands of plants. Sustainable architecture isn’t just about materials though. Designers also focus on how energy will be used in the structure. The Shanghai Tower has wind turbines at the top which power it’s outer lighting. This is like our re-imaging of the Empire State which has wind turbines atop it but also features solar panel covered walls to capture as much renewable energy as possible.

Did you know? By using natural and recycled materials combined with renewable energy sources, these buildings are usually cheaper to construct. Incorporate a few sustainable home improvements into your space to mimic this form of architecture. 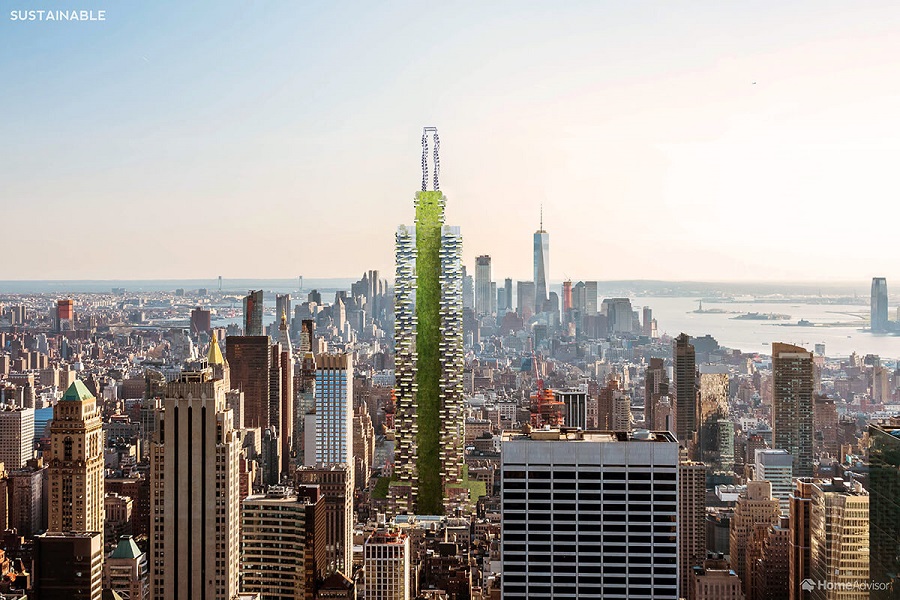 Want to share this project? Please do! We just ask that you credit the original source by linking to this page so your readers can learn more about this project.