What better way to demonstrate America’s diverse architectural styles than through the country’s most infamous family — The Simpsons?

The Simpson family residence is instantly familiar to all, yet their dwelling could have been completely different if they’d embraced one of these popular housing styles.

Tudor housing is perhaps one of the most recognizable architectural styles. Characterized by slanted timber beams decorating the front-facing portion of the roofing, this style often contains small groups of tall, narrow, and multi-paned windows for lots of natural light.

Did you know? Tudor homes are popular in the Midwest, Northwest, and East Coast because their steeply pitched roofs can endure heavy rain and snow.1 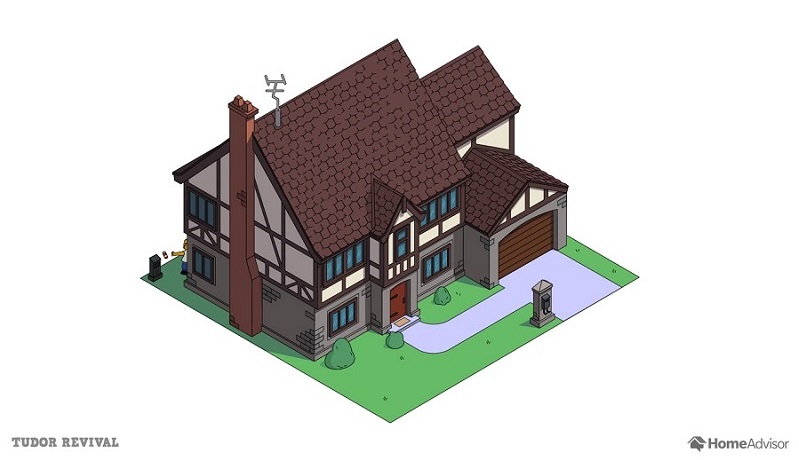 American colonial architecture is a throwback to the period in U.S. history when settlers were colonizing the continent. This style, found in both urban and rural settings, is characterized by square floorplans, symmetry, and straight rows of windows on the first and second floors.

Did you know? Nearly 400 years after it became popular, the colonial style still makes up the majority of housing stock in the U.S.2 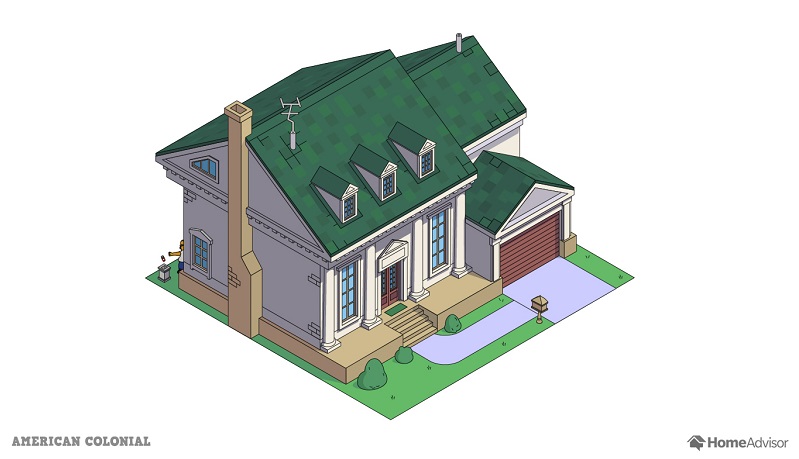 The roomy, light-filled log homes we find today aren’t quite the log cabins of the 1800s. Traditional frontier-style log homes were rectangular, contained only one room, and had at least one glass window. They were built to be sturdy and inexpensive. More contemporary takes on this style often feature grand porches, numerous windows to let in natural light, and a larger footprint.

Did you know? In places where timber was readily available, log cabins could be built in just a few days using a few simple tools—and no nails.3,4 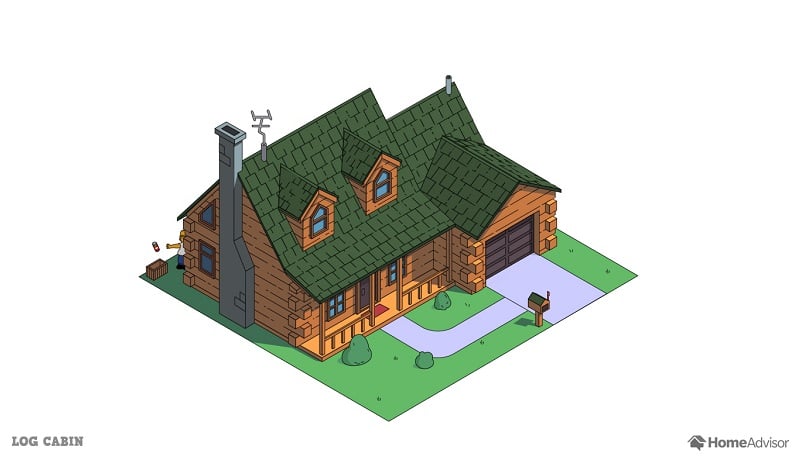 Blending several styles that were popular in the second half of the 19th century, Victorian housing is certainly not subtle. It’s based on grand designs, often distributed over several stories. Common in the suburbs of New York and San Francisco, Victorian architecture features lots of brackets, spindles, and scrollwork and remains one of the most striking styles in the country.

Did you know? The liberal application of decorative flourishes to Victorian homes is a direct result of mass-production making ornamental pieces more affordable.5 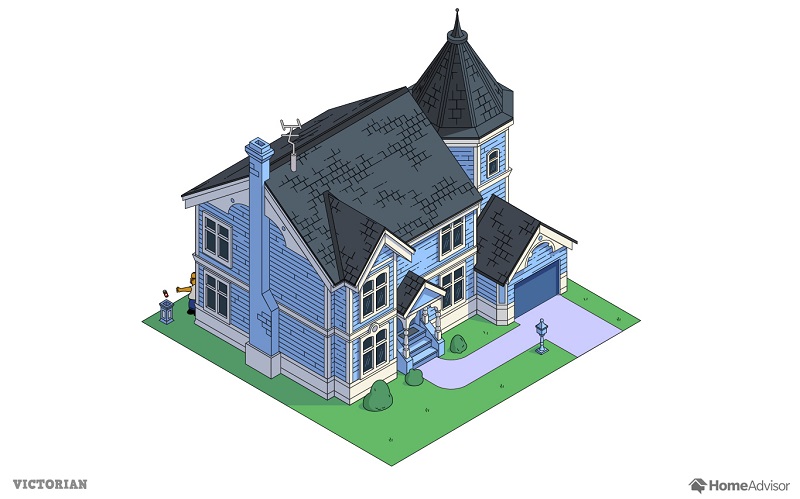 Cape Cod housing, which is associated with the New England region of the same name, is one of the most beloved styles in the country. Designed to cope with the frequently grisly weather conditions in the area, Cape Cod houses occupy a single-story and are dominated by moderately steep, durable roofs that can handle heavy snowfall. The rectangular footprint makes it relatively easy to expand to accommodate growing families.

Did you know? These houses were designed for simple construction and efficient heating, so you’ll rarely find a porch or decorative elements on Cape Cod-style homes.6 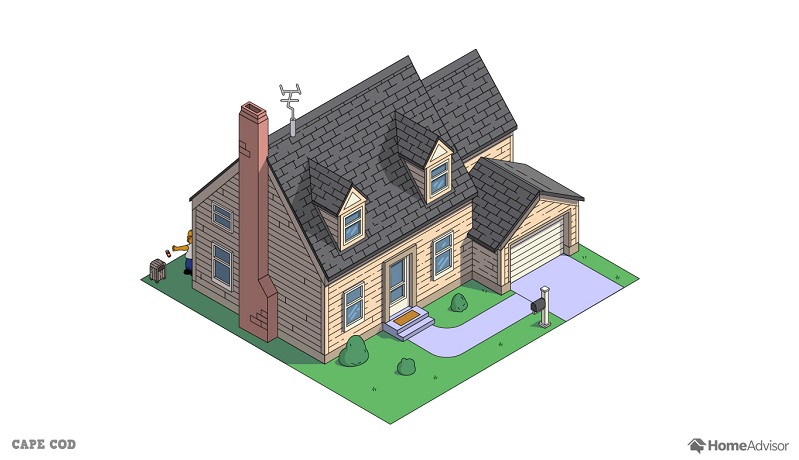 Did you know? When used in the warm, dry climates they were intended for, the signature clay roof tiles used on Mediterranean homes can last for a century or more!7 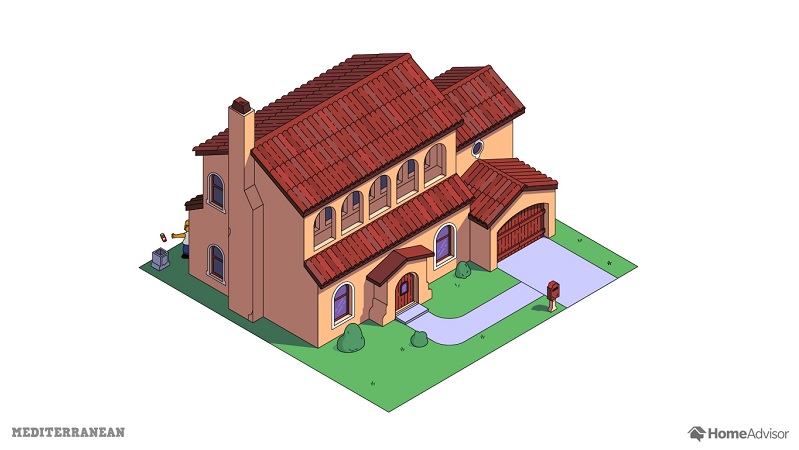 Art deco signaled the beginning of modernity in architecture. Originally from France, the style features flat roofs, smooth stucco walls, and often bold exterior decorations like zigzags, swans, lilies, and sunrise motifs. The Chrysler Building in New York is one of the most famous examples of art deco architecture, but the style can also be found throughout Miami’s South Beach area.

Did you know? This style was mostly used for office buildings, so it’s rare to find an art deco home with a yard and a garage.8 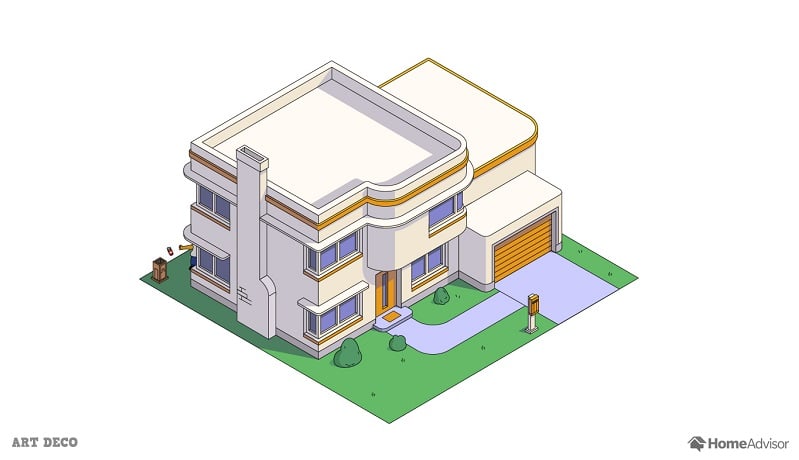 Did you know? Contemporary homes focus heavily on nature and eco-friendly building principles, often using recycled materials and designs that connect the indoors and outdoors.9 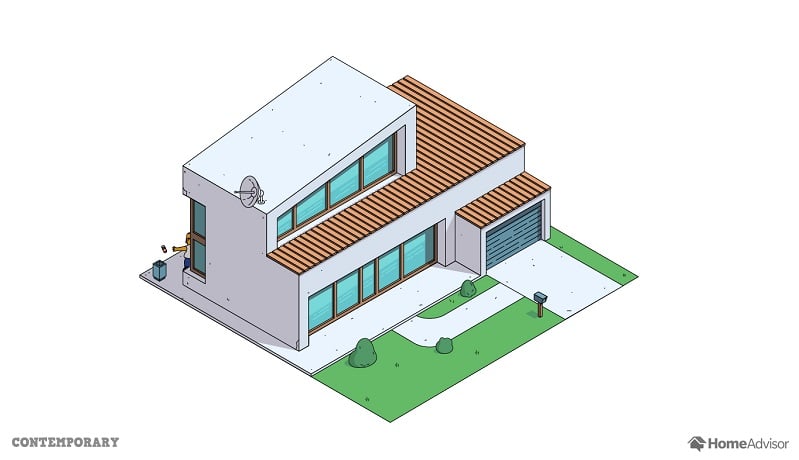 While radically different, each of these styles can be found throughout the U.S. today and represent unique periods in the history of the country.

Add this GIF to your site: