The 100-year evolution of 9 kitchen appliances 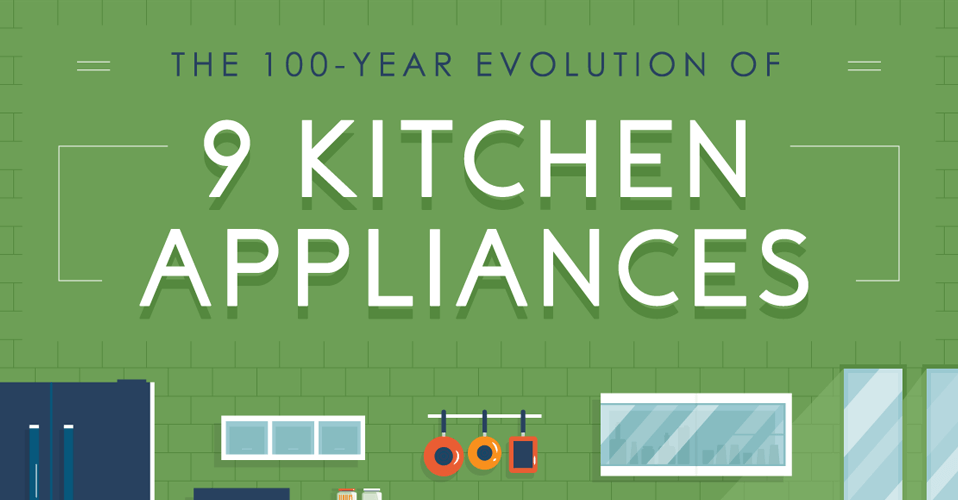 If you’re like us, your kitchen is one of your favorite places in your home. Equal parts chemistry lab and rec room, it’s easy to lose an entire afternoon trying to get that recipe for grandma’s cookies just right.

But today’s kitchen looks very different than what your grandmother was used to. As technology has advanced, our kitchen appliances have become more and more high-tech, making cooking faster, more convenient, and maybe a little less instinctual.

But these changes didn’t happen all at once. The appliances we surround ourselves with have gone through subtle changes over the past one hundred years. When did we take the most innovative leaps? How’d we get the coffee makers we have today? What will toasters look like in another decade? Our researchers and designers put their heads together and charted the evolution of a few of our favorite kitchen appliances. 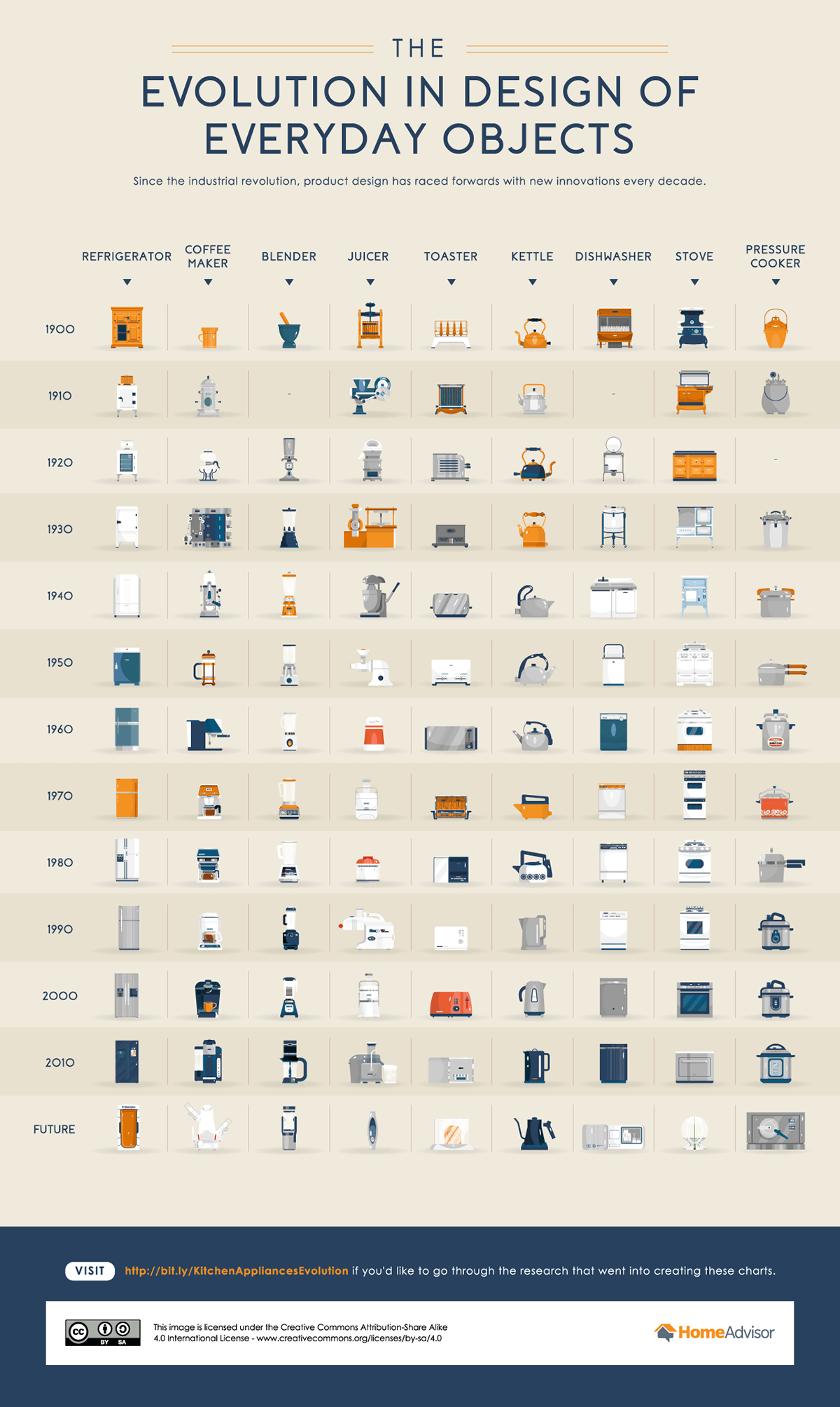 100 years of the refrigerator 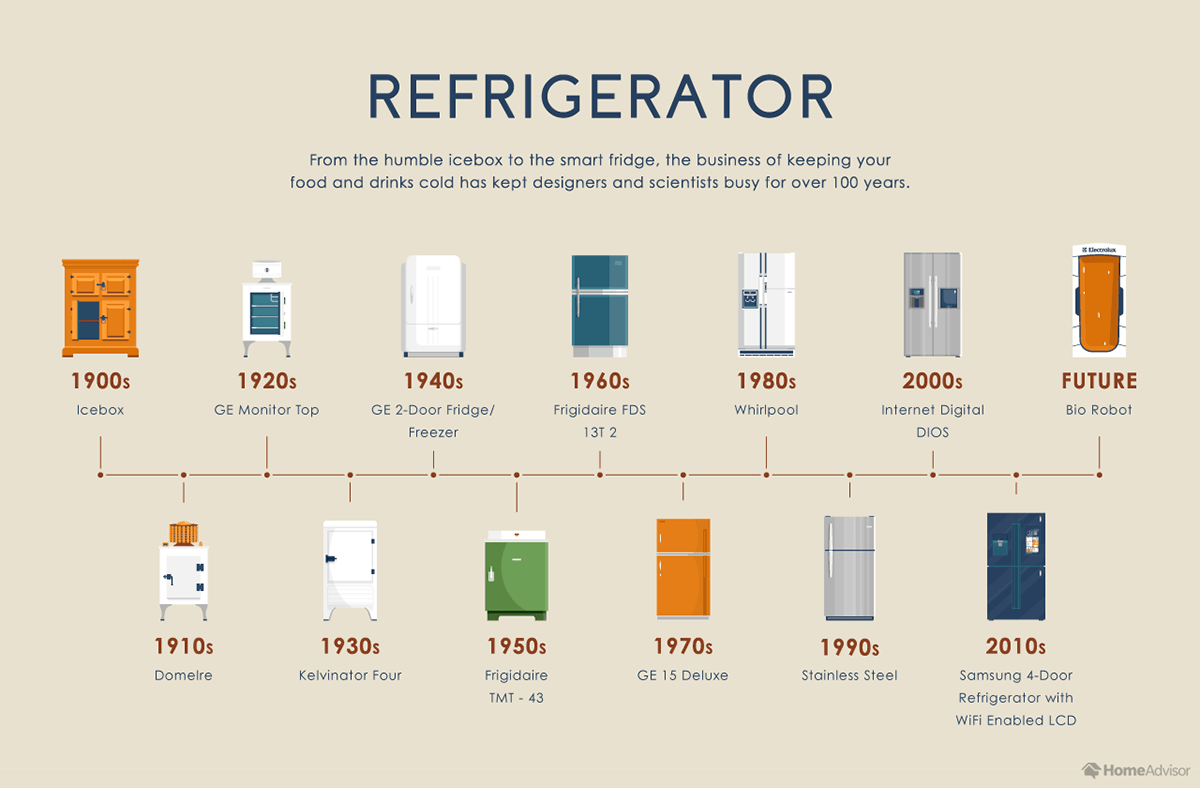 A century ago, the refrigerator was truly just the “icebox”–typically lined with zinc or tin. It was simply a stylized, non-mechanical box stuffed with ice to keep food cool.

Great advancements were made in cooling technology in the 19th Century, however, and in 1911 General Electric and others began selling the first home refrigerators (with various toxic gases used as refrigerants). These could lead to dangerous fridge leaks.

Manufacturers eventually settled on the non-toxic gas Freon and refrigerators were in mass production by the end of World War II. In the early 1990s, manufacturers switched to the more environmentally-friendly tetrafluoroethane as a coolant.

100 years of the coffee maker 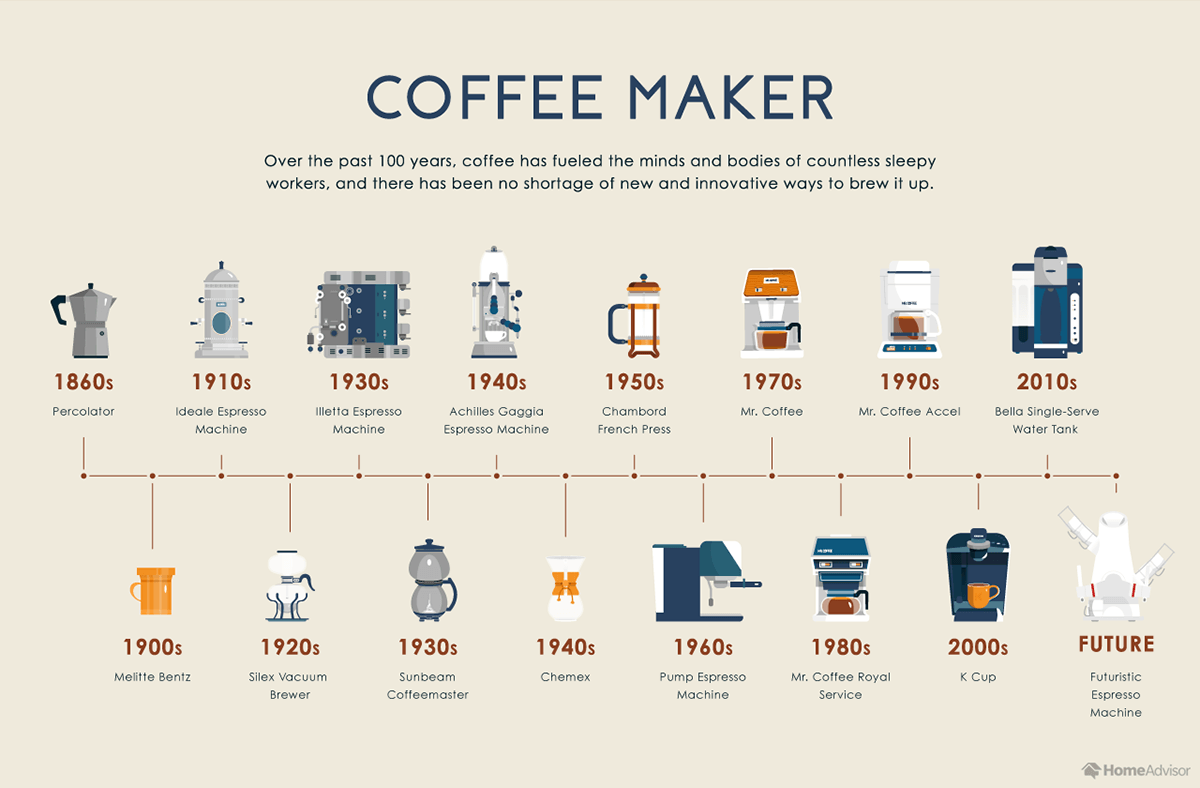 Not a lot changed about coffee makers in their first few centuries of existence. You heated the water, applied it to the coffee grounds, and voila. However, as with so many appliances, the industrial revolution changed everything.

As new technological advances came online, they invariably were used to make coffee–the first vacuum system coffee brewer was introduced in 1920, and coffee makers began incorporating the latest pumps and filtering systems whenever they came out. Once Mr. Coffee, the first in-home automatic-drip brewer, became available in the 1970s, home brewing became widely popular. Today, you can even operate some coffee makers via your smartphone.

100 years of the blender 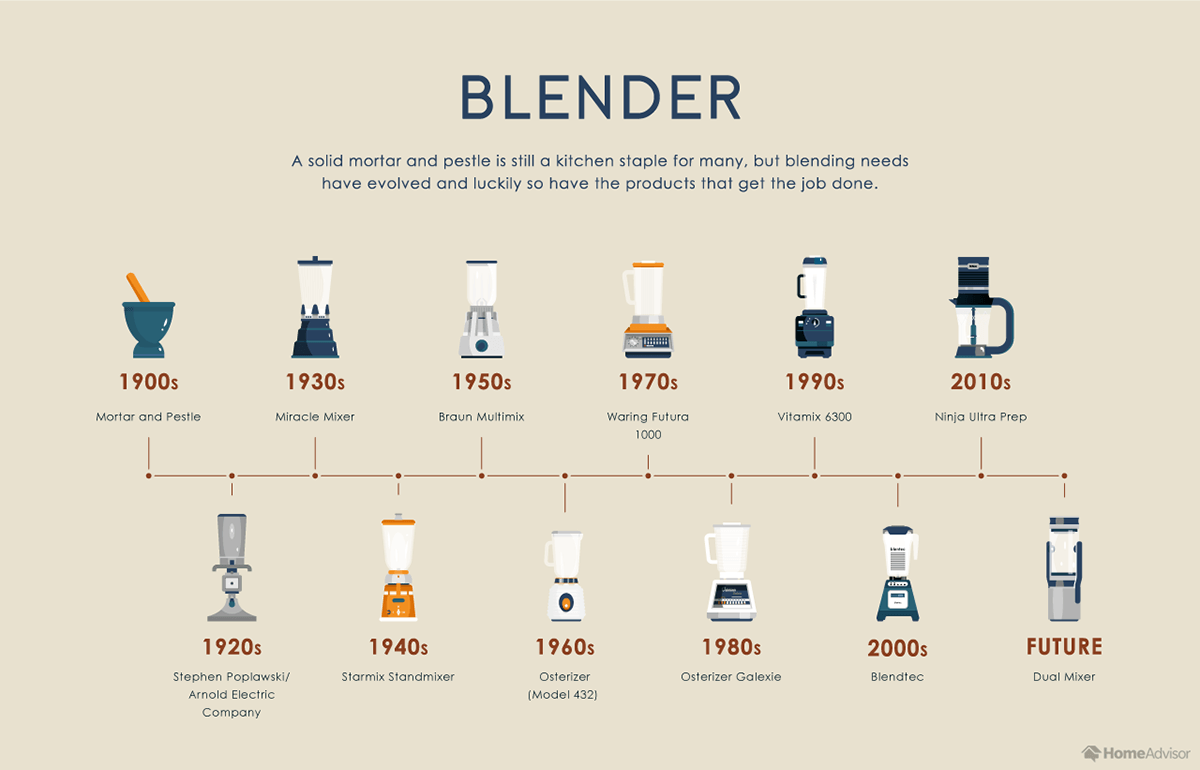 The blender invented by Stephen Poplawski in 1922 was light years ahead of its predecessor–before his creation came along, a mortar and pestle were pretty much your only blending option.

Poplawski’s invention basically just added a spinning blade to the bottom of a container. But a decade later, the Miracle Mixer blender came along, becoming an important tool in hospitals for the mixing of special diets.

The coming decades would introduce advances like more powerful motors and variable blending speeds, but the basic form and function of the blender had been set. 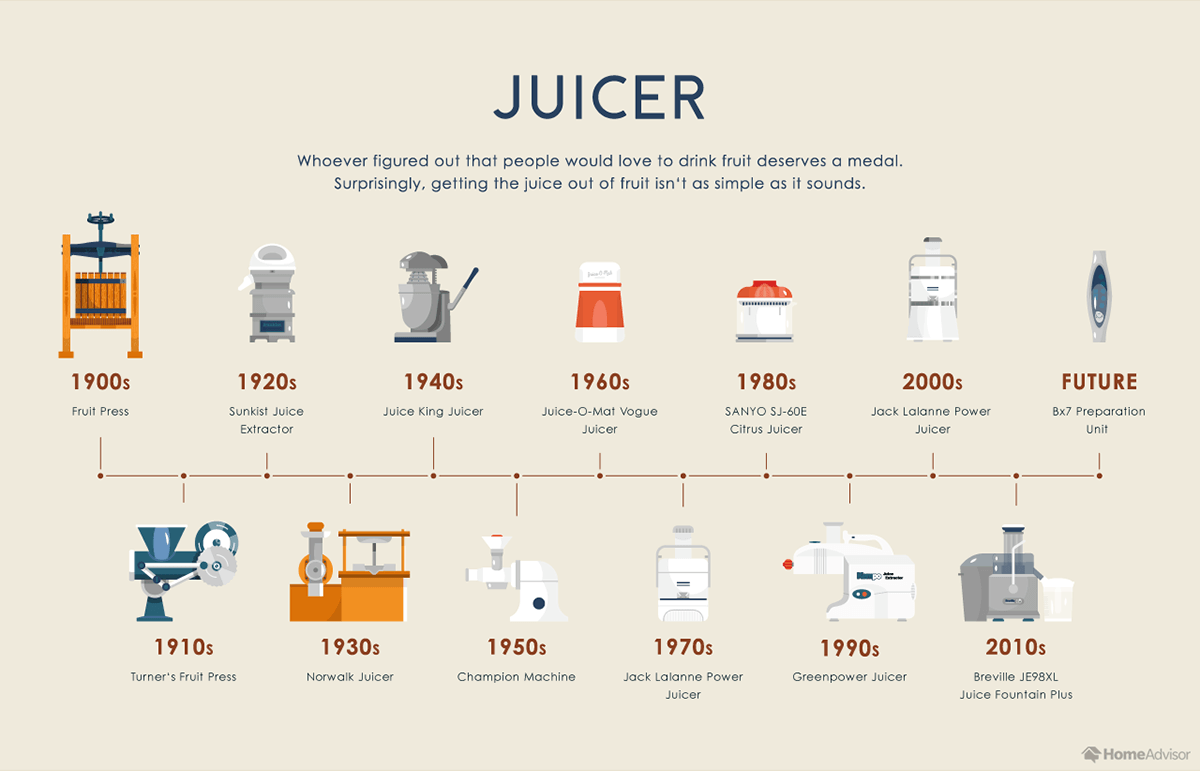 Designers took an interest in the juicer around the Industrial Revolution; a hand-cranked fruit press was previously the only option. The craze was introduced in the 1920s when the Sunkist company began discounted reamers to encourage orange juice drinking.

A decade later, the first juicing machine was introduced by Dr. Norman Walker, a well-known raw foods evangelist. The coming years introduced stronger motors, but users learned that the higher temperatures generated eliminated some of the juice’s beneficial nutrients.

By the 1990s, designers had moved on to twin-gear systems (mimicking the old mortar-and-pestle method), eliminating high heat, and keeping your juice heavy in nutrients.

100 years of the toaster 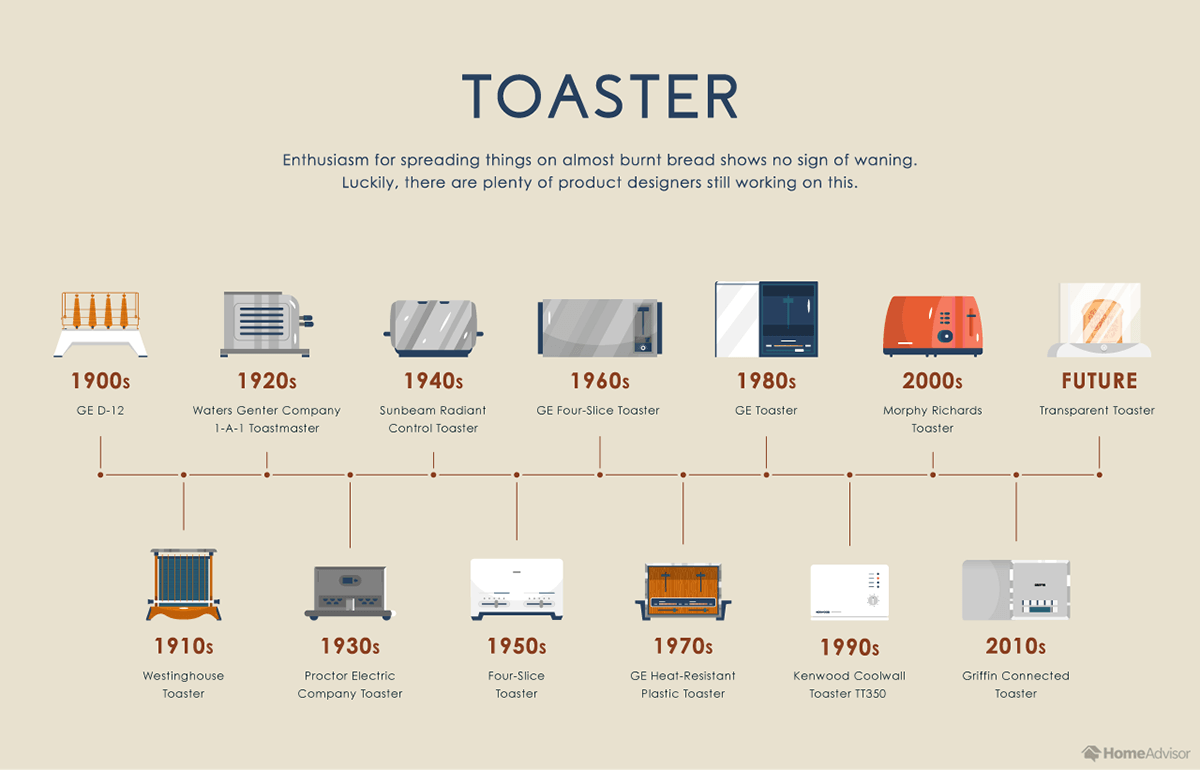 General Electric introduced the Model D-12, the first commercially successful electric toaster, to the world in 1909. The handy little device proved so popular that a wave of companies came out with their own patents in the coming decades, adding new bells and whistles like a pop-up mechanism, timer strips, and holders that could toast both sides of bread at the same time.

When Wonder Bread began selling pre-sliced loaves in 1930, the toaster became ubiquitous with breakfast. And, as technology advanced in coming decades, clever innovations were made to the toaster. Microchips were added to sense bread moistness. Heat-resistant plastic cases were made to give them new colors and designs. 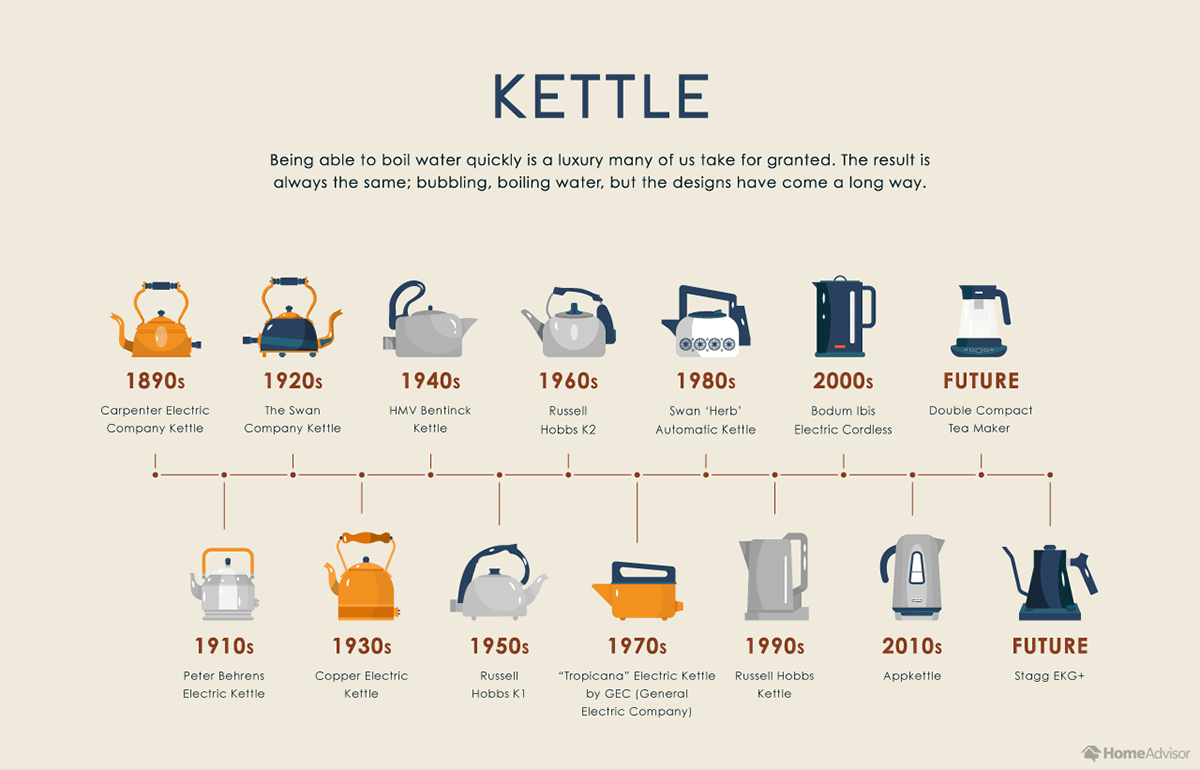 Take a simple concept like the kettle–a sturdy pot for boiling liquid. What is there to improve? But inventors were tinkering with the concept as early as the 1890s when the Carpenter Electric Company introduced its first kettle with an electric-powered heating element in a small compartment beneath the water reservoir.

That concept was embellished upon in coming decades, as designers added an internal heating element, automatic ‘off’ functions, and experimented with heat resistant and insulating materials. The iconic ‘whistle’ first gained wide popularity in the 1950s.

100 years of the dishwasher 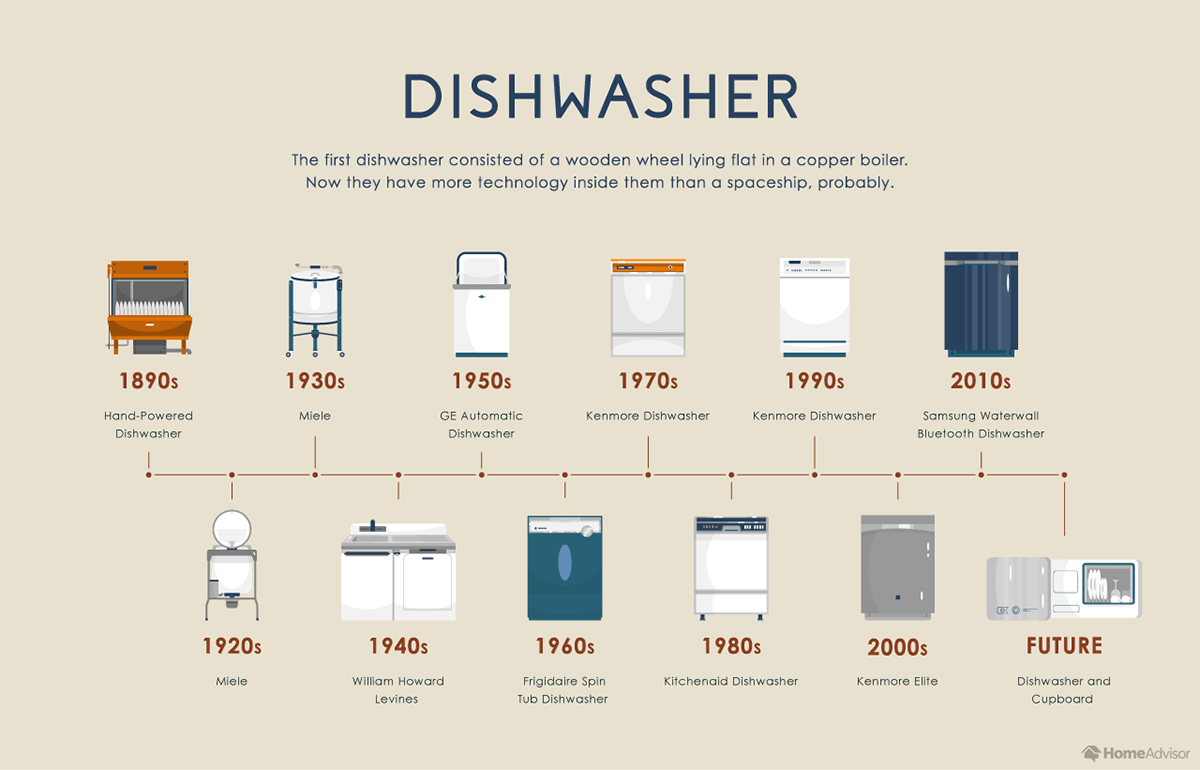 Make a list of appliances that have profoundly changed domestic life, and the dishwasher will be right at the top.

The earliest dishwashers introduced in the 1890s consisted of wooden wheels placed flat inside a copper boiler. Electric motors weren’t introduced until 1920, but when permanent plumbing began to proliferate in the 1920s, demand for dishwashers increased.

A model that we would most easily recognize, with wire racks, a rotating sprayer and front door loading, was invented by William Howard Livens in 1940. 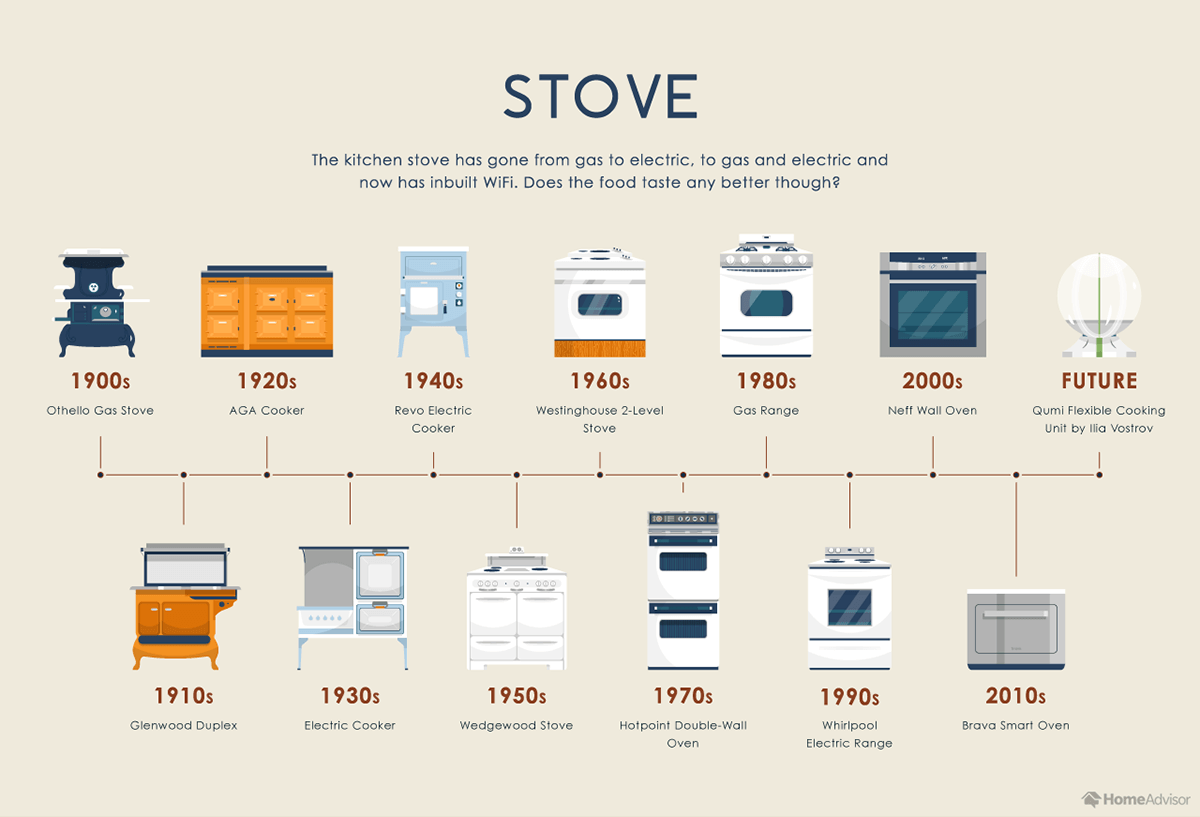 The stoves at the beginning of the Industrial Revolution were large, cast-iron creations, like the gas-fueled Othello stove introduced in 1900.

In the next decade, gas stoves would incorporate enamels for easier cleaning. The real game-changer came in the late 1920s when electric ovens began to compete for space in consumers’ kitchens.

In the coming decades, designers began focusing on new aesthetics, masking or hiding gas manifolds and other hardware. New gadgets like timers and internal lights were added as time went on, but the built-in look had become well established.

100 years of the pressure cooker 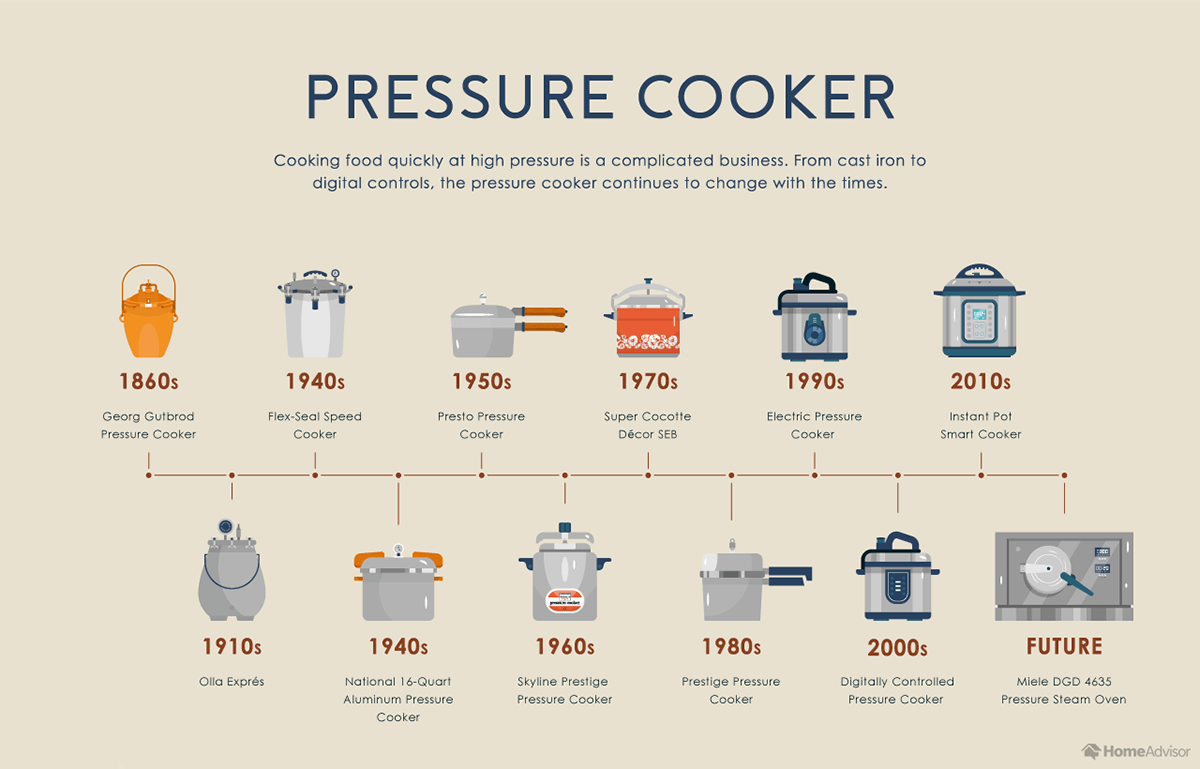 The first pressure cookers were manufactured for customers in 1860, built from tinned cast iron by Georg Gutbrod. Pressure cooking had been experimented with as early as 1679, but would not become broadly popular until World War II, when consumers saw how much could be saved in fuel costs.

Our kitchens might not be the largest spaces in our homes, but the effort and ingenuity that have gone into its devices are enough to fill warehouses around the world. The next time you’re making a meal, think about just how different your experience must be compared to that of your great-grandparents.

Share the evolution of kitchen appliances on your site:

The 100-year evolution of 9 kitchen appliances, courtesy of HomeAdvisor

To create these designs, our researchers looked closely into the design history of each appliance. They looked for the most significant design evolution of each appliance through the decades and found a popular model that reflected the changes.

Visit this page if you’d like to go through the research that went into creating these charts.

Do you love the futuristic appliances as much as we do? If you’re interested in cutting-edge home goods, check out the latest trends in smart home tech and cool new appliances from CES. Don’t let complicated setup stop you from installing a futuristic fridge. Let an expert appliance installer near you slide your new stove or dishwaster into place.